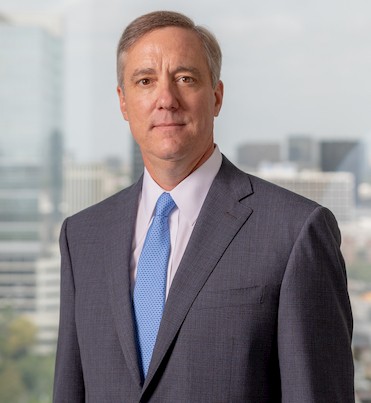 OVER 25 YEARS EXPERIENCE AS A TRIAL LAWYER

Attorney Denman H. Heard has been named one of “the country’s top trial lawyers” by Lawyers Weekly USA.  He has tried over 100 plaintiffs’ claims to jury verdict and has represented thousands of Plaintiffs across the country. Denman’s work has been highly publicized in the media, including in the Los Angeles Times, Houston Chronicle, Austin American-Statesman, Corpus Christi Caller-Times, The Dallas Morning News, The American Lawyer, Texas Monthly, The Atlanta Daily Report, Bloomberg News, Law360, and other publications. Denman is a Fellow in the International Society of Barristers and a member of the American Board of Trial Advocates.

Born August 21, 1966, in Houston, Texas, Denman earned his Bachelor of Arts degree in Economics from Baylor University in 1989. He graduated in 1992 from University of Houston Law Center as the only law student to win the school’s mock trial championship and the F. Lee Bailey National Moot Court Championship, where he was a two-time finalist and champion in 1991.

Denman’s trial career began with the commercial litigation powerhouse Looper Reed & McGraw, now Gray Reed. In 1993, he was hired by Williams Bailey Law Firm. Denman was named partner at Williams Bailey in 1995. He served as partner there until 2000. While at Williams Bailey, Denman tried the first foundry respirator defect silicosis case in Texas; obtained one of the first known punitive damage awards in Texas in a groundwater contamination case against a municipal solid waste disposal operator; and led trial teams in the Fen-Phen and Brio toxic waste site litigation. He also obtained the first ever gross negligence jury verdict in a chiropractic negligence case in Texas, as well as numerous mesothelioma and asbestos verdicts. In addition, Denman tried the only single Plaintiff tobacco case to go to verdict in Texas, where he obtained the admission under oath by a tobacco company executive that nicotine in tobacco products is addictive.

After Williams Bailey, Denman helped form Watts & Heard. The firm handled a variety of far reaching litigation, including Ford/Firestone and other statewide and national product liability cases, and quickly became one of the largest and most successful Plaintiff law firms in Texas, with 29 lawyers and offices in 5 Texas cities and a support staff of over 100. At Watts & Heard, among other cases, Denman won the first and only Sulzer hip implant verdict in the country, leading to resolution of the litigation nationwide. He also tried the wrongful death case of a client who was killed in a trucking accident after colliding with an inadequately marked, stalled oilfield rig on the highway; a fatality stemming from workplace sleep deprivation; and represented clients in numerous catastrophic injury and wrongful death cases.

In 2002, Denman helped form Heard Robins Cloud & Lubel where, among other things, the firm began a highly regarded and successful nationwide pharmaceutical and medical device mass tort practice; and at the same time served as lead counsel for a Fortune 50 company in its property tax litigation. With five offices in four different states, Denman was lead trial counsel for Microtherm, Inc. in its trial seeking over $100,000,000 against component parts manufacturers for an electric tankless water heater; served as trial counsel for a Fortune 500 company in commercial litigation pending in Houston, TX; and represented numerous individuals in product liability and other litigation involving catastrophic injuries. He led nationwide trial and discovery teams in the Avandia, Risperdal, and DePuy ASR metal-on-metal hip litigation.

Denman formed Heard Law Firm, PLLC in 2016, where he won the first design defect finding and largest pain and suffering jury verdict in the country against an IVC filter manufacturer.

He also pushed forward with filing high-profile business interruption claims stemming from millions of dollars in losses caused by the Covid-19 pandemic and remains active in those cases.

In 2022, Denman announced longtime esteemed colleague and friend Derek Merman as a named partner and the formation of Heard Merman Law Firm:

“It is my great honor and privilege to announce that Derek Merman is a named partner in our law firm. For over a decade, Derek and I have worked together on some of the most significant cases in Texas.” 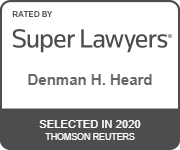 WE HELP GET THE JUSTICE & COMPENSATION YOU DESERVE

Filling out this form does not create an attorney-client relationship with The Heard Merman Law Firm. It is simply to put you in contact with our firm so that we can evaluate your potential claim. Do not provide any information that you consider confidential and would not want to be disclosed to third parties. If you would like to speak with us confidentially, please call us at 713-665-1100.

The information provided on this website is for educational purposes only and should not be relied on as legal advice. Legal advice cannot be given without full consideration of all relevant information relating to your individual situation.

The information provided on this website is for educational purposes only and should not be relied on as legal advice. Legal advice cannot be given without full consideration of all relevant information relating to your individual situation. Likewise, the information contained within this website or any of it’s affiliate marketing content is not intended to create, and receipt or viewing does not constitute, an attorney-client relationship.

You understand that by using the internet or this form to communicate directly or indirectly with the firm or any individual member of the firm does not constitute or establish an attorney-client relationship. Please do not use this form to provide confidential or time-sensitive information to the firm.